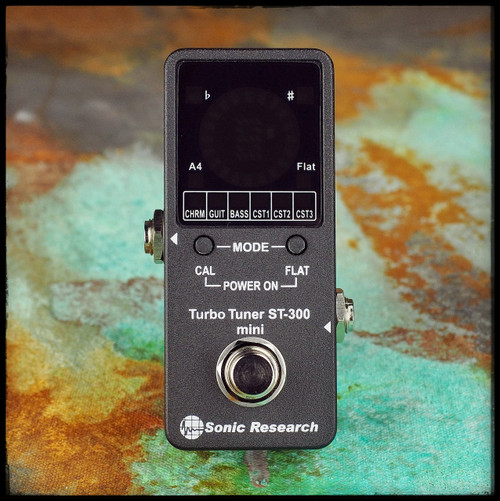 The ST-300 (released in February of 2016) builds upon the sterling reputation of the ST-200!  The MINI has all the features of its bigger brother except for the fact that it has to be powered by a 9V power supply as there is simply no room within the unit for a battery.

It’s hard not to gush over this ground-breaking pedal from Sonic Research. Even a casual internet search reveals the Turbo Tuner to be one of the most highly regarded tuners on the market. It’s easy to see why:

The Turbo Tuner is simply the most accurate pedal tuner on the market today.

Each Turbo Tuner is individually calibrated at the shop to an accuracy of ±1ppm, which is about .0017 cents. The “official” ±.02 cent value listed on the spec sheet takes into account the drift with component aging, so that 20 years from now the tuner will still be within .02 cents (which works out to be ±.005Hz at 440.000Hz)

The Turbo Tuner grabs the note almost instantly, without the annoying lag common in lesser tuners.

Other tuners on the market feature a display that is generated by a microprocessor. The display on the Turbo Tuner is a TRUE stroboscope since the LEDs are driven directly by the analog input signal. What you see on the display is a direct visual comparison of two frequencies: one being the musical note you wish to tune, the other a precision reference frequency.

For those of you that like to work on your own guitars, a true strobe tuner allows you to accurately set the intonation on your guitar!