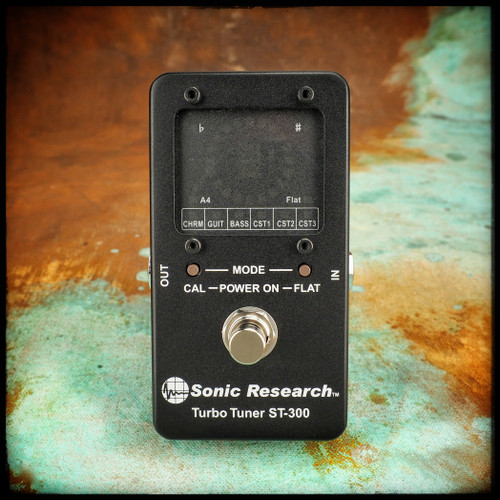 It’s hard not to gush over this ground-breaking pedal from Sonic Research. Even a casual internet search reveals the Turbo Tuner to be one of the most highly regarded tuners on the market. It’s easy to see why:

The Turbo Tuner is simply the most accurate pedal tuner on the market today.

Each Turbo Tuner is individually calibrated at the shop to an accuracy of ±1ppm, which is about .0017 cents. The “official” ±.02 cent value listed on the spec sheet takes into account the drift with component aging, so that 20 years from now the tuner will still be within .02 cents (which works out to be ±.005Hz at 440.000Hz)

The Turbo Tuner grabs the note almost instantly, without the annoying lag common in lesser tuners.

Other tuners on the market feature a display that is generated by a microprocessor. The display on the Turbo Tuner is a TRUE stroboscope since the LEDs are driven directly by the analog input signal. What you see on the display is a direct visual comparison of two frequencies: one being the musical note you wish to tune, the other a precision reference frequency.

For those of you that like to work on your own guitars, a true strobe tuner allows you to accurately set the intonation on your guitar!

Nick Stoubis does a demonstration of the Sonic Research Turbo Tuner ST-200 Strobe Tuner Stomp Box. It is compared to the Peterson StroboFlip VS-F Virtual Strobe Tuner. https://www.turbo-tuner.com/ The Turbo Tuner will mute the signal will turned on. This video had the signal split so that we can hear the sound of the guitar coming out of an amplifier while the tuner is on. Nick Stoubis is a guitar professor in Los Angeles at the prestigious University of Southern California (USC), Thornton School of Music and an educator with vast experience. Nick is also an author of four instructional method books with Mel Bay Publications. Visit http://www.stoubis.com for information on his books and other happenings. http://www.stoubis.com and https://www.facebook.com/stoubis